The Interim Secretary General of the Pacific Islands Development Forum Mr Amena Yauvoli this morning received the visiting Chinese Special Envoy to the China-Pacific Islands Forum Dialogue His Excellency DU Qiwen, at the PIDF Secretariat in Nasese, Suva.
In welcoming His Excellency DU Qiwen Mr Yauvoli noted the close relations between the PIDF and China and expressed PIDFs appreciation for the support that China has shown to the PIDF since its establishment. China provided financial support to the PIDF for its Inaugural Meeting and has sent a Special Envoy to participate at all PIDF Summits. Mr Yauvoli also briefed Ambassador Qiwen on developments in the region and the special challenges they pose for Pacific Islands Small Development States. He also explained the unique role the PIDF is mandated to fulfill which is to assist Pacific Communities transition towards an inclusive, resilient and low-emission society.
In his remarks Ambassador Qiwen thanked the PIDF for its partnership with China in its engagement with the Pacific. Ambassador Qiwen then briefed Mr Yauvoli onSpeaking after the meeting Mr Yauvoli said,
“Achieving a green economy will only be possible through the collective vision, creativity, action and support from a broad cross-section of society, including governments, the private sector, consumers and our development partners.
Countries such as China have been an important partner in the development of the region. For the PIDF itself they have been one of our early partners during the formative stage of our development.
We are excited about our growing relations and we look forward to working closely with them bring about climate compatible development.”
Ambassador Qiwen was accompanied to the meeting by China’s new ambassador to Fiji His Excellency Zhang Ping. 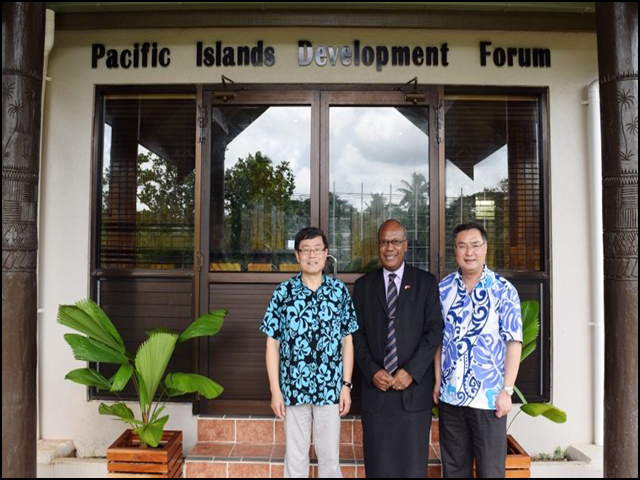