The Interim Secretary General of the Pacific Islands Development Forum Mr Amena Yauvoli this afternoon received the visiting Ambassador of Iran to Fiji His Excellency Jalaladdin Namini Mianji, at the PIDF Secretariat in Nasese, Suva.
In welcoming His Excellency Mianji, Mr Yauvoli explained the unique role the PIDF has in the region in bringing about transformative changes through a development pathway that results in improved human well-being and social equity, while significantly reducing environmental risks and ecological scarcities. Mr Yauvoli thanked Ambassador Mianji for Iran’s support in the international fora on issues of importance to the People of the Pacific.
In his remarks Ambassador Mianji thanked the PIDF for the opportunity to exchange information which he undertook to convey to his Government in Teheran. He observed that Iran understands the aspirations of the people of the Pacific to create their own development space unfettered by outside interest.
Speaking after the meeting Mr Yauvoli said,
“If the world is to move away from emissions intensive development that is threatening the future of the Pacific a new economic model needs to be followed. I am pleased that this afternoon we could discuss this with the Representative of Iran.
PIDF firmly believes that national efforts by Pacific Countries to transition to an inclusive green economy must be complemented by an enabling international environment aimed at expanding the development opportunities of the Pacific. All countries of the world including Iran can be a part of this process.” 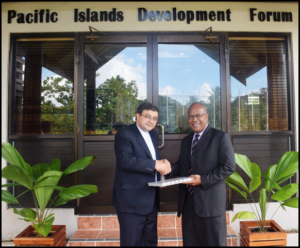