The Interim Secretary General of the Pacific Islands Development Forum Mr Amena Yauvoli yesterday received His Excellency Gary Rachman Makmun Jusuf the Ambassador of Indonesia to Fiji, at the PIDF Secretariat in Nasese, Suva.
In welcoming Ambassador Jusuf Mr Yauvoli thanked Indonesia for its support to the PIDF as shown in the participation as Chief Guest at last year’s PIDF Summit of His Excellency Susilo Bambang Yudhoyono President of the Republic of Indonesia.
Mr Yauvoli also noted the announcement during the Summit of Indonesia’s contribution of $20 million as development assistance to the Pacific.
Speaking after the meeting Mr Yauvoli said,
“I am pleased with the opportunity to meet with Indonesia’s representative based in Suva and to discuss how we can build on the good relations between the PIDF and Indonesia.”
“As one of the world’s major emerging economies that is undertaking serious efforts to transition to a green economy by 2025, there is much that the Pacific can learn from Indonesia.”
“Today we discussed some of the ways we can do this which includes collaborating for the upcoming Third PIDF Leaders Summit which is scheduled to meet in Fiji from 12-14 August this year.”
“We also explored how we can work together under the Global Green Growth Institute in Korea which is currently chaired by His Excellency Susilo Bambang Yudhoyono of Indonesia. This is a major forum which is helping a lot of countries transition to green economies. We have had a number of meetings with this Institute and with Indonesia in the Chair now we look forward to stepping up our engagement with this important organization.” 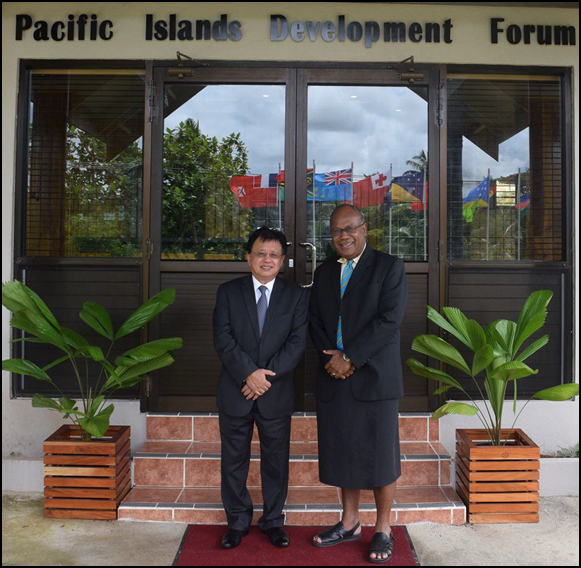