The United Nations has this week informed the PIDF that in accordance with Article 102 of the UN Charter the Secretary General of the UN has registered in New York the Charter of the PIDF that was signed in Suva on 4th September 2015 at the conclusion of the historical Third PIDF Leaders Summit.
There are currently ten signatories of the PIDF Charter. They are Fiji, Kiribati, Marshall Islands, Micronesia, Nauru, Solomon Islands, Tonga, Vanuatu, Pacific Islands Association and Non- Government Organization, Pacific Islands Private Sector Organization.
Speaking from Tonga where he is attending a Pacific-SIDS New York Missions Chair’s Retreat and Strategy Meeting, the Secretary General of the PIDF Mr François Martel expressed his happiness at this major milestone in the development of the PIDF:
“I am delighted by how quickly this very young international organization has grown since its inaugural meeting three years ago. In that very short space of time the PIDF has successfully concluded a Host Country Agreement with Fiji, it has successfully concluded five partnership agreements with key regional agencies and international NGO’s that will provide technical support to the PIDF, it has successfully promulgated its Charter with ten members signing on since the last Summit. Now the UN has given the green light and registered the PIDF Charter with the UN Treaties Division in New York.”
“Registration opens up the door for the PIDF to participate fully in all UN processes and systems. This cannot come at a better time when the PIDF is gearing itself up for engaging in a number of major UN undertakings in the region on Post-COP21 initiatives and the Agenda 2030 and its Sustainable Development Goals Framework. He further added “I thank the Government of Fiji, as the Host Country of PIDF for facilitating the tabling of our Charter with the UN.” 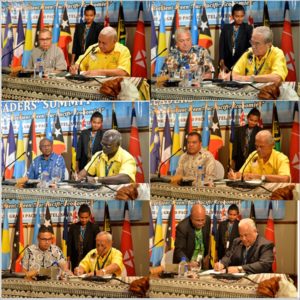